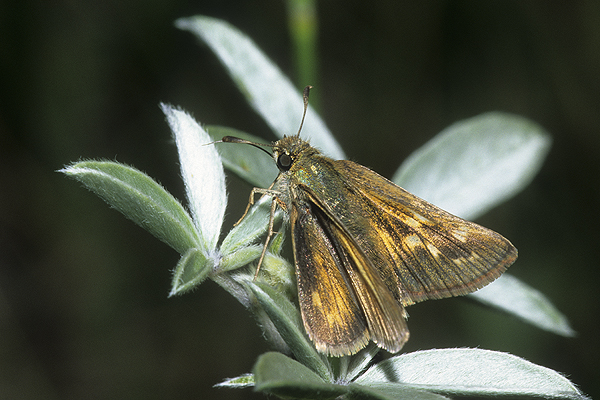 The family Hesperiidae includes all butterflies that are collectively called skippers because of their fast skipping flight.  This family is the sole member of the Superfamily Hesperioidea.  Whereas, the other five families of butterflies belong to the Superfamily Papilionoidea.  So, skippers are considered butterflies, but they have a few traits different than the species of “True” butterflies found in the Superfamily Papilionoidea.  Some of these traits include large eyes, short antennae (often with hooked clubs) and stout bodies.  Most also have a very rapid flight with a fast, almost blurred, wing beat.  There are about 3,500 species of skippers and they’re further divided into seven subfamilies.  They occur worldwide with more found in the tropics. Most species are brown or tan, but some tropical members can be quite colorful. 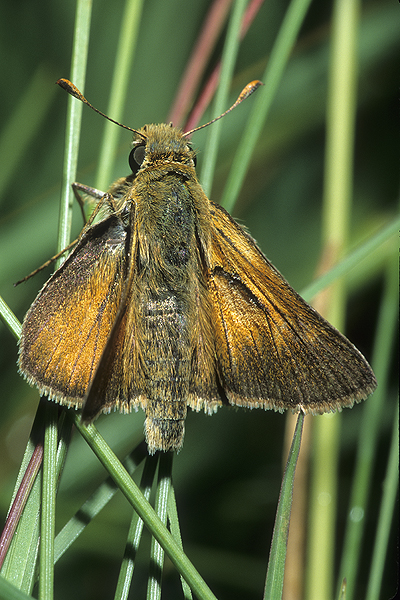 Hesperia dacotae belongs to the subfamily Hesperiinae.  This rare and vanishing species is found from southern Manitoba and western North Dakota to western Minnesota and south to northwest Iowa.  Its preferred habitat includes rolling hills of native tall-grass prairie.

The larval food source includes various grasses such as little bluestem, Andropogon scoparius, bluegrass, Poa pratensis, and panic grass, Panicum sp.  Mating occurs on the first day of emergence, with males perching on low vegetation to watch for receptive females.  Eggs are laid singly on broad-leaved plants, and the caterpillars must climb down into the grasses.  Caterpillars eat grass leaves at night and make shelters of silken tubes lined with grass.  Fourth instar caterpillars overwinter in shelters that are partially underground.