Well, the tradition continues for the third year in a row.  Below are Bryan’s favorite photos for the 2012 butterfly expedition season.  Check out below each image for the reasons why Bryan selected them.  Clicking on the photos will send you to the treatment page for that species. 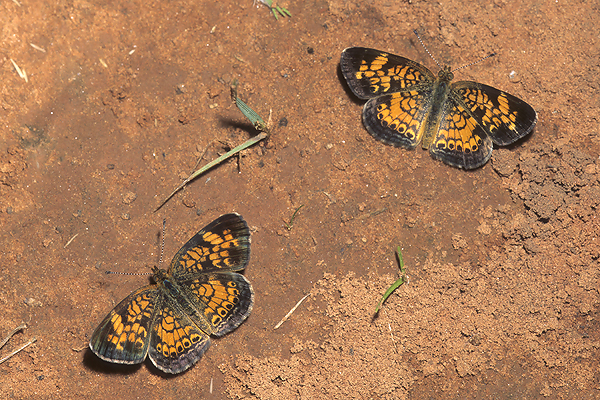 “One theme I’ve noticed with my picks for 2012, are they are all very common species that can be found abundantly within their ranges.  This species, the Pearl Crescent, is no exception.  While I have, and will definitely continue, to photograph exotic species in exotic places, I want to emphasize, great beauty can be found right out everyone’s backdoor.  This pair of Pearl Crescents were imbibing minerals from a damp spot less than a mile from my home in central Oklahoma.  I like the thirds placement of each one, the typical red Oklahoma clay and that each butterfly is very fresh.” 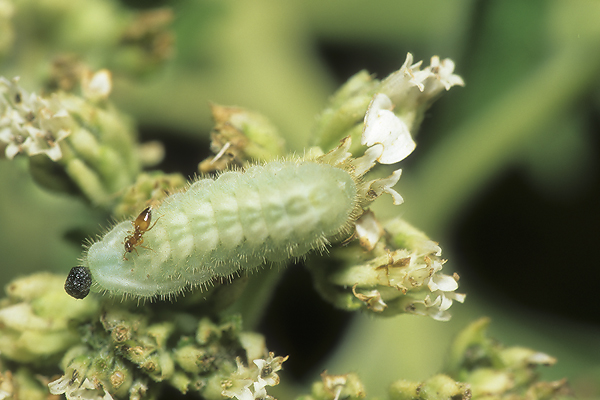 “One of my goals for the 2012 butterfly season was to find and photograph immature stages of butterflies.  This involves a different kind of searching that I wasn’t used to.  For the adults I’m typically looking for movement and I’m very active, covering a lot of ground in a short period.  For the ‘babies,’ I had to learn to slow down and methodically search larval food plants.  First off, I had to dramatically increase my knowledge of larval food plants and then look for various clues such as leaf damage, frass and even adults showing interest in the plant.  It was a very fun process and I will definitely continue doing it.

Here we have a Gray Hairstreak caterpillar munching on the flowers of a White Crownbeard and also ejecting a pellet of frass out its back end.  The neat thing about this photo is the little ant that is on the back of the caterpillar.  It is obtaining a drop of ‘honeydew’ from a gland on top of the caterpillar.  This relationship is called Myrmecophily, where the ants protect the caterpillars from predators, and even herd them around to choice parts of the plant for the caterpillars to feed on.  In return, the ants receive the precious honeydew from their ‘cows’.” 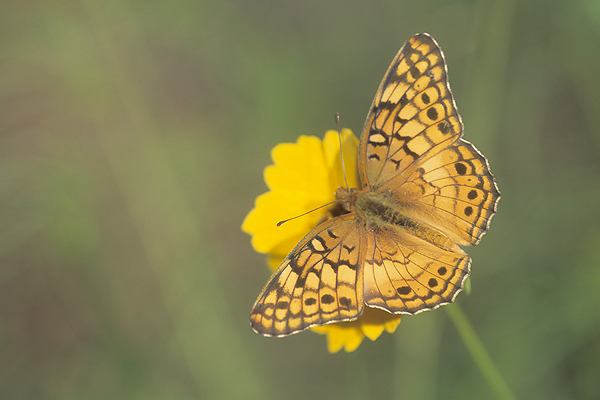 “Here in central Oklahoma, the 2012 butterfly season started out wonderfully with some nice rains and abundant wildflowers.  The butterflies came out with a vengeance in both numbers of species and individuals of each species.  The Variegated Fritillary is an abundant species in my area all through the warm season.  Since I already have many photos of this species, I’ll typically pass on photographing it unless something unique is going on.  However, in this case, I couldn’t pass up a clean shot of a fresh and cooperative individual.  I like the crisp butterfly popping from a clean background.  And, of course, a nice pop of color from the flower also helps.” 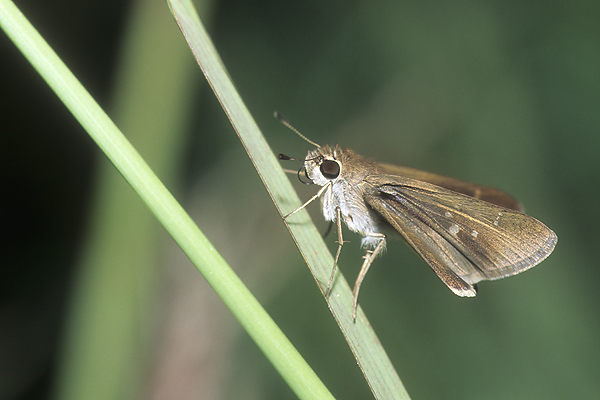 “A Eufala Skipper is basking in the ‘airplane pose’ on an early morning in central Oklahoma.  These are fairly common skippers in my area, but they are tiny and often overlooked.  I had to get down low to parallel the edge of the left wing surface to maximize sharpness.  I like this unique angle of the butterfly with the diagonal grass through the frame.”

“This Black Swallowtail larva (incidentally, Oklahoma’s state butterfly), was photographed at the Oklahoma State University Botanical Garden in Stillwater, Oklahoma.  I was there for a filming segment of Oklahoma Gardening about larval food plants and they had a large patch of dill with several caterpillars of various instars munching away.  After the filming, I grabbed my camera and photographed them.  I like the pose of this one with its front end raised up.  I shot at a low f-stop to blur out the background and I like the diagonal of the plant stem with the caterpillar off-center in the frame.  Getting a shot of the caterpillar was part of my plan to photograph more immature butterflies in 2012.”

“As much as possible, I strive to isolate my subjects from a clean background of color.  I always smile when I come upon a patch of fresh, nectar producing flowers, that are fairly tall, at least above the surrounding grasses.  I then can photograph the subject isolated up away from other distracting elements.  It’s even better if I find flowers on a windless day with lots of fresh butterflies.  A day like that happened in May close to my home when I took this shot.  Even though this is a very abundant butterfly, I’m very pleased with the results.” 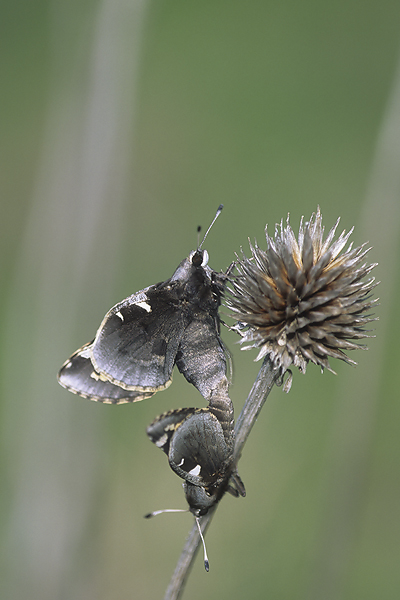 “There are a few butterfly days that stand out for me and this, 31 March 2012, is one of those days.  It started with my search for a different butterfly, the Frosted Elfin, with which there were 20 year old historical records near the town of Sulphur, Oklahoma, about 1.5 hours drive from my house.  After a couple year search that involved contacting and getting directions from the original researcher, the right timing of the brood flight, gaining access to private property, and dodging a vicious thunderstorm, I found and photographed adult Frosted Elfins on the morning of this great day.  They were a new-for-me species and I even got them ovipositing.  After that excitement, I decided to drive to the Chickasaw National Recreation Area, literally a five minute’s drive away, to just poke around and see what was out.  I noticed a large patch of ground that had been control-burned the year before and had a bunch of Yucca growing.  I stepped out and after just a minute, noticed a Yucca Giant-Skipper, another new-for-me species.  It was a male and he was just basking in the ‘jet airplane pose’.  I got some shots of him and then a large female flew by.  He blasted after her and she landed on a dried and withered plant that was still standing from the year before.  He then proceeded to try to copulate with her, with his abdomen in a ‘J’ position, while I blasted away with my camera.  After a few seconds she ripped out of there with him literally an inch from her tail.  I watched them land about a block away.  So, I kept my eyes on that spot and carefully stepped over the copious amounts of cactus, yuccas and fist to head-sized loose rocks.  Thankfully, there were no rattlesnakes to step on.  As I got closer, I found them again and noticed they had hooked up.  I then took my time and got a few photos including the one above.  As is my theme, I like the clean background, the vertical orientation and the dried coneflower head coming up diagonally through the frame, not to mention the great behavior.  After I got my shots of this pair, I spent the next few hours in this spot photographing several individuals, both males and ovipositing females as well as eggs.  All in all, it was one of the best days of butterfly photography I’ve ever experienced, with two new species, lots of great behavior, all within a short drive from my home.” 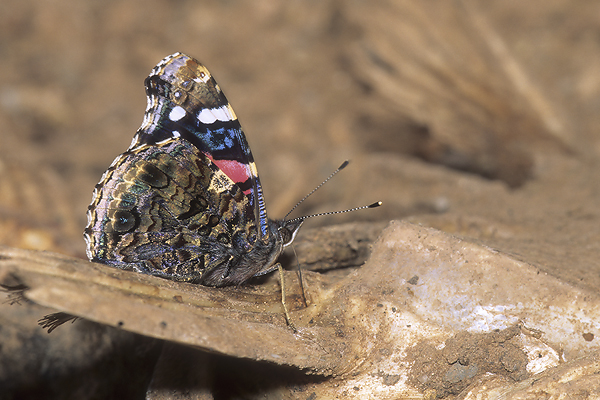 “2012 was a very big year for the Red Admiral here in central Oklahoma.  I was giving a butterfly photography seminar at the Arbuckle-Simpson Nature Festival at the Tishomingo National Wildlife Refuge where we checked out the edge of a pond hoping to find some mud-puddlers.  We weren’t disappointed and had several butterflies probing a dead fish.  I got some shots of a few other individuals and then noticed one of the freshest Red Admirals I’ve ever seen.  It was perfectly content to just slurp away on the fish while I got a few shots.”

“As previously mentioned, in 2012 I tried hard to find and photograph immature stages of butterflies.  Here’s another fruit of my labor, a Question Mark caterpillar.  I like the leaf veins showing texture and at a good angle.  I like the thirds placement of the caterpillar and the “j” curve of the the body.  I think it’s a very pleasing image.”

“A fresh Common Buckeye is always a stunning sight to see and this one is no exception.  I actually photographed this gorgeous specimen at the same spot and at the same time as the two Pearl Crescents above.  In fact, I also photographed a couple fresh Mourning Cloaks, Hackberry Emperors and Eastern Tailed-Blues at this spot while barely having to even move my feet.  I like that this one is a little off center, at a slight diagonal, and perfectly flat to my film plane to give edge to edge sharpness of the wings.  People need to realize this sort of beauty is right out their backdoor and unless we make some drastic changes, may disappear forever.”